Ever since Windsor Smith’s LA home was featured in House Beautiful, I have been really obsessed with the kitchen. Most importantly, I have been obsessed with the idea of a skirted wing chair at the head of a dining table. I have always loved a good wing chair, but the idea of skirting it, and taking it out of the living room and bringing it into the dining room or kitchen has really got me excited. 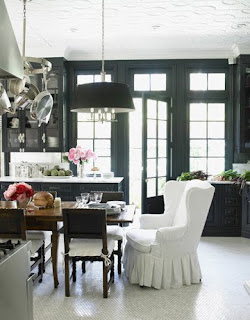 Something about the latent formality in a wing chair, coupled with the casual and flirty nature of a skirt, looks perfect at the head of a table. Below are some options for skirted wing chairs. 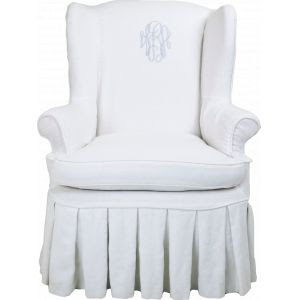 This one is from the Windsor Smith Home Collection, and definitely the costliest one in the bunch. It is the one that is in Smith’s own kitchen, and is what got me excited about this concept. I love the pleated skirt … so feminine. Not sure how I feel about the Monogram, I get it on bags and things like that, but do you really need to identify your own chair? 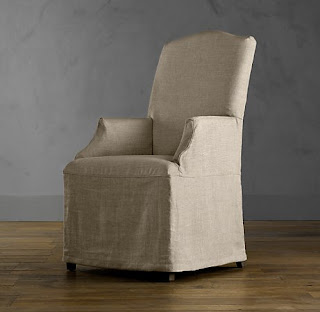 Restoration Hardware. Not a traditional wing chair per se, but a skirted dining armchair nonetheless. It has the whole belgian linen aesthetic that Restoration Hardware has become so obsessed with as of late, so I worry if this is a “look” that will get dated fast. Also, not so cheap. 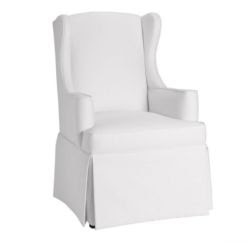 Finally, my fave. Ballard Designs, always a good place to stop for traditional-ish upholstered furniture at decent prices. I love the tailored traditionalism of this wing chair, and I think it would look fabulous at the head of a dining table, or maybe a few of them if you had a round table. What do you think?