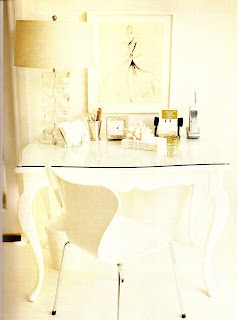 Domino
When I get down, I find myself perusing back issues of Domino. My friends all think that I’m crazy that I have lugged all my issues of Domino from Charleston to NYC to Philadelphia–but they’re necessary. Tonight over pasta with meatballs and glasses of malbec, I opened up the February 2007 issue of Domino. Hoping to “Conquer Clutter”, instead I found photos of Kelly Rutherford’s home office, her WHITE home office (desk shown above). It got me thinking about the color white, or rather the absence of color, and how much I adore it! 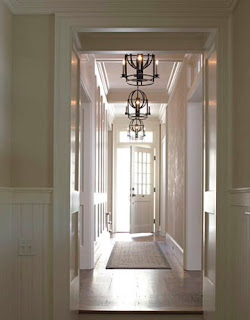 House Beautiful
Although white seems like it might have been passed down through the ages, the color white is a very modern phenomenon. In the 18th and 19th centuries, white was not considered as a color in the home design of the upper class.  Whitewash, which was made using chalk and water, was used to coat the interiors of the homes of the lower classes. In the homes of the upper classes, color ruled the day! 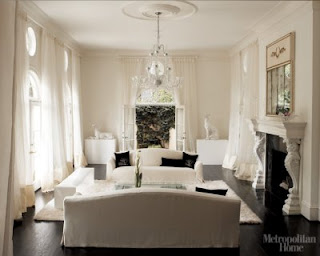 Metropolitan Home
Today, white has become a color statement in and of itself. Benjamin Moore makes hundreds of “white” colors to choose from for paints, and the amount of different “white” twill available in fabric stores is astonishing. As in this living room above, white can formulate an entire decorating scheme, and make a statement in itself. White used to be the accent color used to lighten darker rooms, but now, darker colors have become the accent, and white has become the mainstay of many palates. 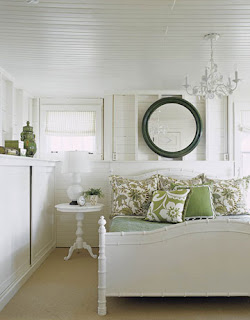 House Beautiful
One of the best things about white is its diversity. It complements almost any color. As a result, when white is used as the anchor in a room, as it was above, there are many colors that can be utilized as the accent color. 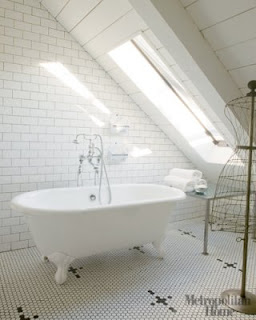 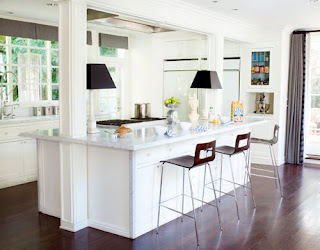 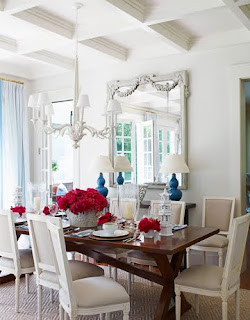 House Beautiful
The inherent problem in any truly white space is cleanliness. White not only shows dirt, but white seems to attract dirt, so unless you are a very clean person, or you are someone who enjoys the company of a dust buster and lint roller, than perhaps the truly white space isn’t for you. But it sure looks fabulous, doesn’t it? However, white is cheap, and many rental apartments come equipped with white walls and a “no paint” clause.  Do not despair, white can be super chic!