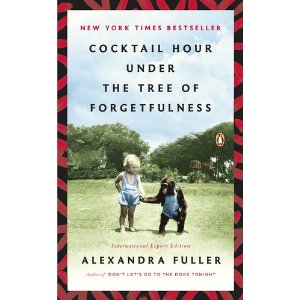 If you have not yet read Cocktail Hour Under the Tree of Forgetfulness, I highly recommend it. It is a story about life in Africa, and stories like that are always exciting. This story, unlike West With the Night or Out of Africa, provides a little more comic relief. Reading this book has put me in the mood for British Colonial decor. A style I have always admired, I am hoping to incorporate it into the design scheme of the Charleston house. 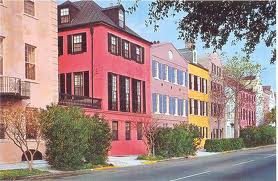 This is in fact extremely appropriate, because Charleston is often thought of as part of the Caribbean – made clear by areas of town such as Rainbow Row above. Instead of arriving directly from Great Britain, most of Charleston’s early settlers came by way of the Caribbean; and unlike many of the settlers arriving in New England, these early Charlestonians came to South Carolina already wealthy Caribbean landowners. 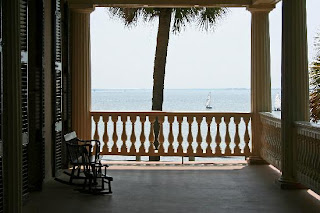 These British ex-patriots arrived in Charleston already well versed in the trials and tribulations of living in a hot and humid climate. Taking a cue from the homes that they had built in the Caribbean, or rather some of the mistakes they had made, Charlestonians built houses that faced south with double and triple height piazzas so that they might take the utmost advantage of the breezes coming off the harbor. It is in keeping with this British Colonial history of Charleston that I look to British Colonial decor of the Caribbean for inspiration. 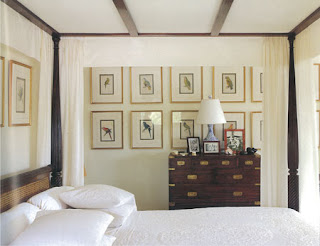 One cannot really admire Caribbean decor without looking to India Hicks. Daughter of the late great designer David Hicks, and a flower girl at Princess Diana’s wedding, this Brit has made her life in the Caribbean, incorporating all of the things that I would like to see in the second bedroom in Charleston. Campaign furniture, such as the chest in the photo above, is a must – and caned furniture like the bed in that photo is an added bonus. 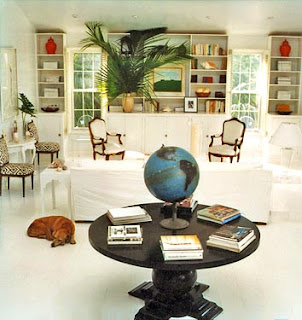 Books are everywhere, and the floors are painted white – notice the lack of rugs. The all white scheme helps with the heat, and the palm fronds bring the outside in. I love the contrast of dark antiques with the white walls, floors, and upholstery. 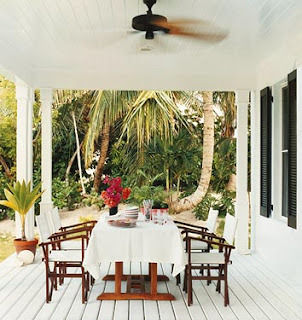 Ah, yes, and one of my favorite aspects of campaign furniture … that it is portable! Again the contrast of the dark wood folding chairs against the white table cloth and porch – wonderful. So far I only have antique campaign bed side tables in place … but I’m getting there.