Darryl Carter, one of my favorite decorators, typically works in spaces with more traditional architecture, but he decorates with an understated minimalism using both traditional and modern furniture. What I love about his take on traditional architecture is that many people forget that historic colonial homes had very little furniture. Drapes and carpets and wallpaper and bric a brac is something that was brought on in the 19th century, and taken to the next level during the Victorian era. So when Carter decorates either an 18th century space, or a colonial revival space, he is actually decorating the space like it would have been originally. 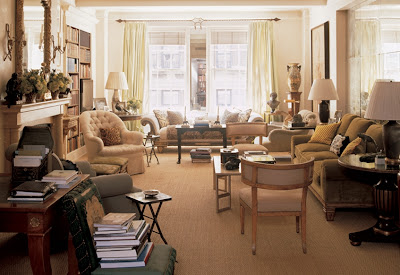 Here is Bunny Williams’ NYC apartment. I also love this look. Stacks of books on chairs, under tables, bookcases, flowers on the mantle, and several smaller seating arrangements. For some reason, I always love this look for a New York apartment. I don’t know what it is about our apartment in NYC, we have so little space, but I want our apartment to look more like this. And that is easy, because I have stacks of books everywhere and no shelves to put them on! 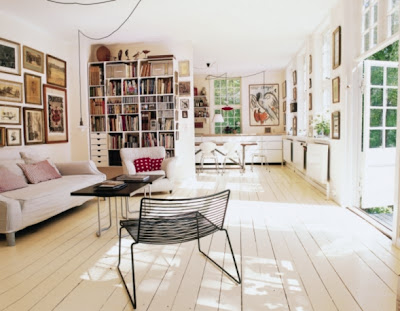 But this, this is the ultimate. Somehow this Copenhagen living room manages to have both a minimalist appearance, as well as having tons of stuff in it. I love the stacks of paintings on the walls and the bookshelf brimming with books. And yet the room does not feel cluttered with the minimalist furniture and doors opening to the outside … I love it. Also helps that this house sports 12 over 12 windows, my fave. What do you think? What type of decorator are you?
Images via DarrylCarter.com, BunnyWilliams.com, and Marie Claire Maison Italia