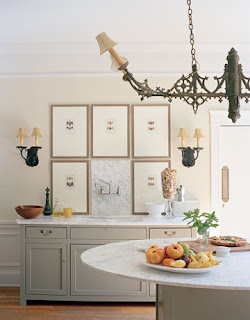 House Beautiful
Lately I have been into the idea of formal kitchens. I’m not sure if it was Richard Norris’ dining room/kitchen that was the inspiration (shown above), but I feel as though its a trend that has been floating just under the radar for a while now. 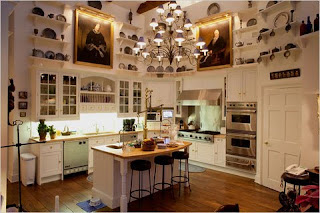 I think that the formality of a kitchen can be dictated by artwork and light fixtures, such as in Joan Rivers kitchen above, or in the cabinet work and architectural details. I just love the idea that you are cooking underneath these two 19th century figures, looking down on you from their lofty portraits. 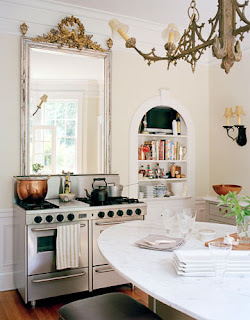 House Beautiful
Back to the Norris kitchen, which was a dining room, which apparently they thought they would never use. Although I love this kitchen’s aesthetics, I wonder about actually cooking in the space … I quite like having countertops on either side of my stove–that is when I don’t live in a teeny tiny apt! 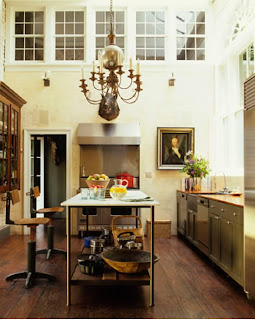 athid.com
In an Amelia Handegan kitchen (see yesterday’s post), she not only uses a portrait on the wall (one of my pre-requisites for a formal kitchen), but she also uses dark wood cabinetry that mimics a secretary. Additionally, the kitchen sports an amazing formal chandelier … and a boar’s head for good measure. I absolutely cannot get enough of this kitchen. 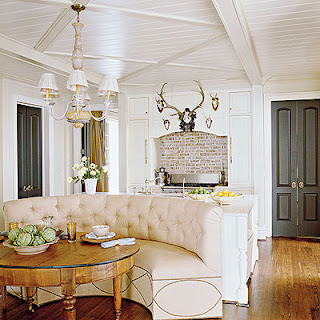 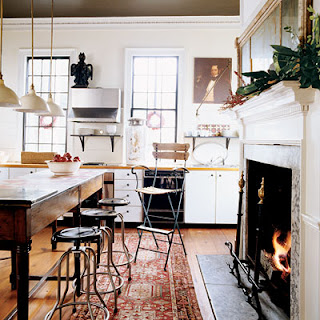 Southern Accents
Finally, I absolutely adore this kitchen. And again, its in the luxe details that makes it one of my fave formal kitchens. Notice the oriental rug on the floor. Paired with my pre-requisite portrait, plus the beautiful gold mirror over the mantel (which in itself adds a little something). Throw some boughs of magnolia over the mantel, and call it a day. What a kitchen!