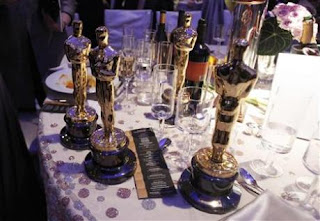 I don’t know about all of you, but I felt like last night’s Oscars were a bit disappointing. Not only were Alec Baldwin and Steve Martin only mediocre (how did that happen?), but I felt like there were a lot of movie stars not in attendance. The audience felt kinda thin to me, whaddya think? I am so proud of Kathryn Bigelow for her win for best director, you go girl(!), it is time that a woman pull rank in that boys club. And the director of The Hurt Locker totally deserved it. 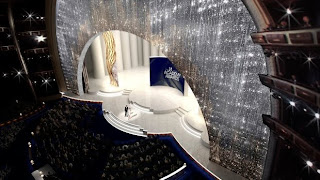 In my opinion, the real winner last night was David Rockwell, the architect who designed the Oscar set both this year and last year. The curtain was made up of over 100,000 Swarovski crystals, which glittered with true hollywood glamour. 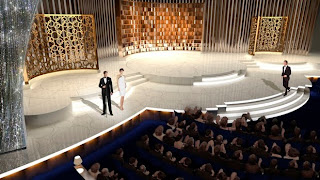 The set had an almost hollywood regency-esque vibe with the geometric gold paneling and sexy curtain. Unfortunately, I could not find a picture of the lampshade wall that came down periodically throughout the performance, if anyone has one please send it along! The lampshade wall is getting blasted all over the internet this am as a big mistake, but I rather liked it. All in all I think that the stage was sexier and more over the top than the majority of the stars this year who were wearing rather simple and subdued looks. 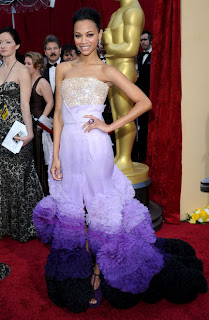 Except Zoe Saldana. This young actress wowed in her Givenchy Haute Couture dress which sparkled and billowed as she walked the red carpet. The color and the crystals and the ruffles evoked true old hollywood style, and her dress was one of the few that stood up to David Rockwell’s set. This is what the oscars are all about … a dress like this. 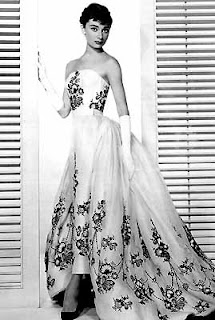 And honestly, who would expect less from the fashion house who was Audrey Hepburn’s exclusive designer, and who designed this iconic dress for the star’s role in Sabrina? After last night, I believe that Zoe Saldana’s dress will be joining the ranks of the one above as one of THE great dresses. Anyone notice the similarities?